skip to main | skip to sidebar

Recently I asked some small groups to think about the Kingdom of God and the church, which led them to do a classic 'compare and contrast' exercuse. I'm pleased to discover in their feedback that they seem to have 'got it'!

For in the Kingdom the focus is unashamedly on Jesus, whilst in the church that is not always so.

The Kingdom is inherently spiritual, while the church is inherently an earth-based gathering (albeit one that hopefully intends to be a spiritual people).

The Kingdom is perfect (by definition). The church remains imperfect.

The Kingdom is wherever God is at work, seen through what God is doing, or glimpsed in the people where God is present. The church can too easily be focussed on one place, one set of practices, or one set of traditions.

The Kingdom is of God. It is aligned to His will. The church can easily be of people and influenced by their will.

The Kingdom is about the Living Word (Jesus). The church can entrap itself in its own incomplete understanding of the written word (the Bible).

So Kingdom or church ... which would you choose?

Join a church and love it - but remind yourself and your fellow church members to keep your sights on The Kingdom!
Posted by Karl Relton considering 21st Century Mission at 17:55 No comments:

Genesis chapters 11 to 13 give us an insight into two contrasting peoples and two visions for humanity.

The first is of a people who highly self-organise. They build: a city, and with it a tower that 'reaches to the heavens'. This is about being self-sufficient, of setting themselves up despite (or even in spite of) God. It is all about them and what they can do.

Note there is nothing necessarily wrong with organising or building: people will form community and will organise themselves - that is okay. Yet the tower is the give-away: they think they can reach themselves for the heavens, i.e. that sense of more, of something greater, of perfection. They instinctively know that there is more to life, but they are mistaken in thinking they can achieve it for themselves. Their attitude betrays the intrinsic problems of self-organisation of fallen humans - it has a capacity for becoming a greater evil than the sum of the individuals.

The intervention by God, and the ensuing confusion, is called in Hebrew 'Babel'. Or another name: 'Babylon' - symbolic for that which stands against God. It is a name that then echoes through the grand arc of the Bible story right through to the book of Revelation.

The second is Abram and the long-range promises of God. Through him God will make a people, who themselves will be blessed and will be a blessing to others. They will range far and wide, such that they can be salt and light to the whole world.

This is a vision of people walking rightly with God. It is through these people that blessing comes, that proper connection between 'the heavens' and the earth. Note how these people do not always have to cling to certain land or territory: Abram is initially commissioned as something of a nomad. He is also prepared to give up land (see chapter 13 verses 8 to 10), for he already understands something of God's abundant provision wherever he might have to go.

Ironically there is a sense of Abram's descendants being scattered, through which wide ranging blessing will come. This is in contrast to the first set of people who were forcibly scattered to thwart their efforts. Scattering in itself can be blessing or it can be a curse!

Into the lineage of Abram eventually comes Jesus. And he too is of the 'scattering will lead to worldwide blessing' kind of mindset!

So now, for us Jesus-followers in our churches, who stand in the line traced from Jesus and in fact all the way back from Abram: which vision are we called to sign up to? The highly self-organised one in which we build fantastic structures that appear to reach up to the heavens ... or the confidence in being scattered as those who walk rightly with God through which blessing to many may come?
Posted by Karl Relton considering 21st Century Mission at 08:53 No comments:

Yesterday it was reported that a primary school had backed down from a court case regarding school assemblies. The school had assemblies of a Christian nature, and at least one set of parents requesting not only that their children be withdrawn on these occasions, but that the school provide suitable staffed alternative provision. Court action by the parents was backed by an organisation called Humanists UK.

What is interesting to me in this kind of case is not so much the rights aspects, nor the lament that Christians may have about the loss of religious input into schools. Those aspects go part and parcel of living in a 'post-Christian' culture that is increasingly secularised.

No - more interesting is the apparent felt need by humanists to go to court in the first place. If a humanist is also a devout atheist, then logically they have nothing to fear from people praying or even their children joining in with prayer! For surely if God is non-existent then prayer is nothing - a mere pointless and fruitless exercise. At worst it is simply misguided and perhaps irritating - but something that an atheist parent "who knows better" can easily explain to their children.

The need to go to court perhaps suggests something more: an illogical fear giving rise to the felt need to assert a 'humanist religion' in schools. Depending on how far and how vigorously that is pursued, it could of course become an 'evangelical faith' of its own, and itself end up infringing the legitimate human rights of those who do believe in God and the power of prayer.
Posted by Karl Relton considering 21st Century Mission at 16:05 No comments:

The term 'Digital Babylon' offered by Kinnamen and Matlock gives incredibly helpful language for our contemporary context. For a great insight, watch this YouTube video:
The digitally connected experience that we are now immersed in is akin to the people transported to the foreign land of Babylon - a place that is largely Godless and with a number of competing thoughts and experiences.

Yet despite these surroundings true faith is still possible - God can still be known, and He is still active. The sister term 'Resilient Disciples' is equally helpful - people who learn to be faithful and forthright in their faith despite the surroundings.

Remember that Daniel and the other greats from that part of the Old Testament did their faith within the foreign system! They lived different yet did not isolate themselves off. They even had high ranking positions in the regimes that sometimes (but not always) overtly acted against faith in God.

Let us not build fortresses to contain adherents, but let us do our mission out their in the wild of Digital Babylon, seeking to be and to make resilient disciples who can thrive even in such a foreign land. For this is the way of God - who is still working, still transforming, and still drawing forward in His salvation purposes.

Disney Gets it Right

Over the summer I watched the new Disney Lion King: the CGI remake of the original cartoon. In a way I only partly enjoyed it, because some of those great one-liners I remember from the original had been replaced (to my dismay) with new dialogue.

Yet in the new script was one key line where the script-writers get it right. Scar is being taken to task for his despot approach to kingship, and is told:


This chimes so well with the Christian poem in Philippians 2, describing Jesus not hanging onto his position but giving it up, lowering himself for humankind, indeed the whole of creation. He lives a 'given life', giving himself for the benefit of all around.

That one liner in Disney's Lion King captures the concept, and shows what true kingship and leadership is about. Thank you Disney script-writers!

Too bad many of our national top politicians don't seem to get this concept - pray for them!
Posted by Karl Relton considering 21st Century Mission at 15:14 No comments:

There are times when I find myself praying that God would simply open up the heavens and pour down His glory: a kind of Isaiah 64:1 'rend the heavens' thing, or Isaiah 45:8 'you heavens above rain down my righteousness', or Isaiah 40:5 'the glory of the Lord will be revealed'!

A few weeks ago I had the privilege of passing through Singapore, with time to visit 'The Jewel' at the airport. Truly an extraordinary achievement of man, and a sight to behold - for you get to see this! 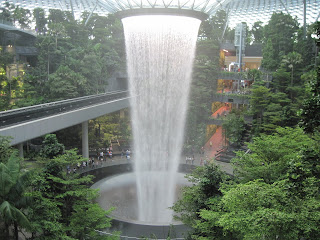 A massive circular waterfall, pouring down from the domed roof of this extraordinary 5 story building!

In my mind its hard to beat this sight enjoyed at The Jewel as an illustration of God rending the heavens and pouring down His glory! The domed roof for me is symbolic of that spiritual barrier perceived by many between us in physical creation and the heavenlies. Yet through this barrier God pours in an incredible abundance, which produces life all around it (see the lush green plants/trees around the pool).

On occasion when doing prayer ministry for someone I will get a sense of God pouring down onto/into their life. Sometimes it is a sense of water falling, sometimes like rose petals gentle coming down over the person, just occasionally soothing or anointing oil. Any of these is encouraging for me and the person receiving prayer.

Yet I continue to pray and long for a day when 'the glory of the Lord will be revealed', where it is an unmistakable mass waterfall seeming to come through the 'roof' of the world!
Posted by Karl Relton considering 21st Century Mission at 21:25 No comments:

"I want you to know that what has happened to me has served to advance the good news of Jesus!". These were Paul's words in a letter to the Philippian Christians. Paul had devoted himself to travelling city to city, proclaiming Jesus in each place.